Our wonderful exhibition ‘Katherine Jones – The Precious Hours’ may have ended but if you didn’t make it then we will be showing Katherine’s work at this year’s London Original Print Fair at The Royal Academy of Arts. There will also be an exclusive launch of a limited edition etching by Katherine – ‘The Freedom of Clouds’ especially for The Young Collectors evening on Thursday 3rd May (Rabley Stand 24) when Katherine will be there to meet and discuss her work.

END_OF_DOCUMENT_TOKEN_TO_BE_REPLACED

We are delighted to announce the exclusive launch three new print publication by artist Emma Stibbon RA at the London Original Print Fair 2018.

END_OF_DOCUMENT_TOKEN_TO_BE_REPLACED 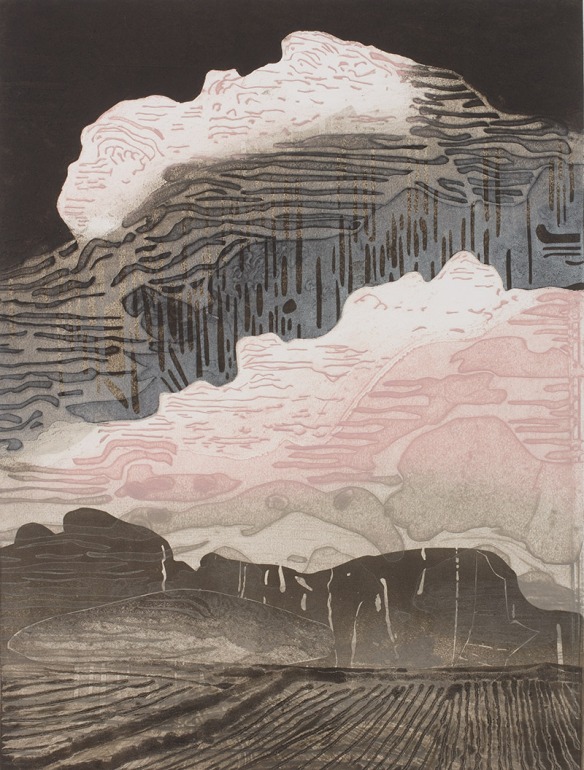 The Precious Hours is an exhibition of new prints and works on paper by Katherine Jones, Rabley’s artist-in-residence 2016-17 and runs from 17 March – 28 April 2018 at Rabley Gallery, Wiltshire.

During her residency Katherine Jones travelled down to Rabley Home Farm from her home in London on a monthly basis. Katherine was able to witness the seasonal changes on the farm as well as more formal changes such as the sale of the dairy herd, which marked a fundamental shift for the farm. She has not attempted to document these changes straightforwardly, rather, the relative space and minimalism of the cultivated landscape in contrast to the squeeze of the urban environment; the differences in scale; the bittersweet nature of farming and our larger changing environment have been the catalyst to the new work. END_OF_DOCUMENT_TOKEN_TO_BE_REPLACED 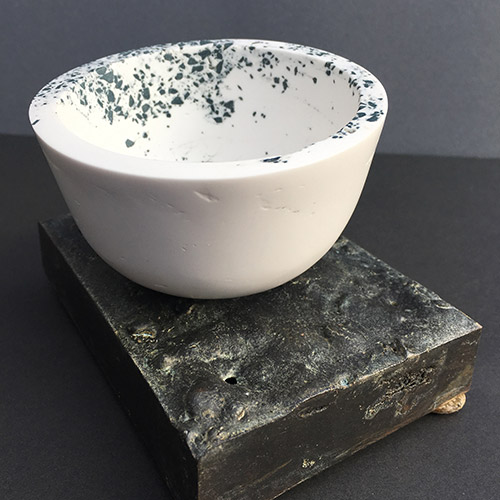 For over thirty years Fred Gatley has been carefully incorporating found materials within his pieces, many of these introduced into the clay bodies themselves. Sands, silts, muds, brick fragments, stones and rusting iron have all been used, combined with drift woods and even waste copper scraps, all of these bringing to the work their own story and location.

In ‘The Rabley Series’ Fred has responded to the landscape and environment of Rabley Home Farm, a working arable farm set in the ancient Wiltshire downs. The landscape throws up echoes of its history including fragments from the Neolithic, Iron and Roman ages together with the everyday chips of a contemporary working farm. END_OF_DOCUMENT_TOKEN_TO_BE_REPLACED

Everyone Is A Moon is an exhibition of new work by artist and printmaker Amy-Jane Blackhall that takes the form of an immersive sculptural installation.

Blackhall’s work emerges from her fascination with the concept of interconnectedness, through the physical and spiritual act of making, particularly the repetitive nature of print.

Underlying structures are central to her imagery; derived from sacred places, she frequently references archetypal symbols, Oriental art and Eastern ideologies. Recurring themes in her work reflect on how the universality has a strong aesthetic appeal transcending space and time, language and culture.

A large lunar abacus takes centre stage. A familiar childhood object used for counting now holds hand blown glass moons positioned to mark the lunar phases of 2017. Casting it’s own shadow and reflection in the mirror moon it exists beyond it’s framework; as the audience orbit the space they can’t help but interact and engage.

Accompanied by a series of prints made from solar plates there is an emphasis on the comfort in the cadence and repetition of ongoing cycles that both anchor and elude us.

Neil Bousfield’s Home and Place and Walcott woodcut series reflect on notions of temporality, loss, and fragility. The prints begin to map and record the impact of the process of coastal erosion, storms, sea surges and rising sea levels on Walcott as a place. The delicate marks and pallet used act to unravel a narrative that explores a changing landscape and community.

Nik Pollards Wallasea drawings explore the relationship between landscape and nature. In 2015/16 Pollard was invited by the RSPB to help record the Wallasea Island Wild Coast Project though drawing and painting on site. The RSPB reserve in Essex is an ambitious project in which ancient wetland landscape is being recreated using, amongst other things, 4.5 million tonnes of spoil from the London Crossrail. It is part of a plan to combat flooding, the effects of climate change and to replace lost natural habitat. Saltmarsh, mudflats, lagoons and pasture are being established through major earthworks – the biggest conservation and engineering project of its type in Europe.

The energetic drawings are the result of two visits made to the site and reflect Pollards fascination for the contrast between the site under construction and its development as flora and fauna beginning to take hold.

Each year, as part of the Gallery and Rabley Drawing Centre’s programme we invite artists to work in the Rabley studios. In 2017 the night and the sky loom in the themes of these special works on paper. Eileen Cooper’s new Luna series poetically combine figures and flowers in conversation of love. Large colourful woodcuts by Sadie Tierney RCA ‘Norge San Draumr’ will cut an impressive view into a nocturnal sky. Delicate works on paper Katherine Jones look to the clouds, this small cumulus works have accumulated on the preceding wind of the artists solo exhibition opening in Spring 2018. Ceramicist Nicholas Lees will present a light box of forms with the light shimmering at the lathed edges of his porcelain. Rabley Gallery has commissioned Jo Taylor to make a limited edition of 50 porcelain ‘Unomi’ bowls to accompany a new series of of ‘Tea Bowls’ woodcuts by Japanese artist Nana Shiomi.

Artmas will feature a beautiful collection of paintings, works on paper, prints, ceramics and jewellery from your favourite Rabley artists. 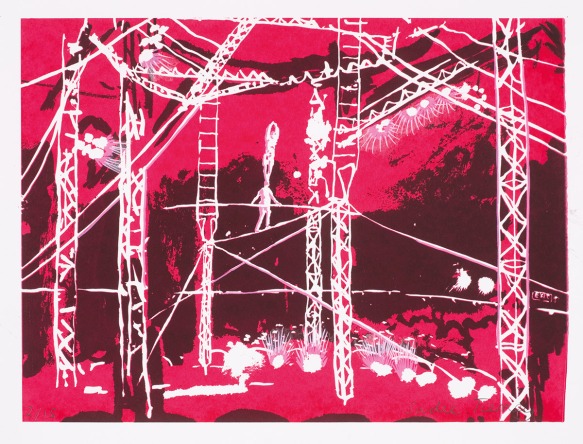 To coincide with the opening of Sadie Tierney’s exhibition Of Night, Light and the Half-Light at Rabley Drawing Centre this month, we are offering a special limited edition print ‘Starflyer’ together with a copy of her new book that accompanies the show. END_OF_DOCUMENT_TOKEN_TO_BE_REPLACED

We have been delighted to welcome artist Sadie Tierney to be in residence in the Rabley Drawing Centre print–room making stunning woodcuts for her forthcoming exhibition ‘Of Night and Light and the Half-light’. 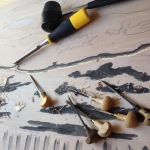 Monumental in scale, she has honed the blocks and cut the images using hand and mechanical tools, never loosing the freshness of the drawing translated from her sketched and sometimes drawn directly onto the plywood sheets. 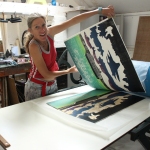 Even the large press could not cope with printing the works in one piece. saw. END_OF_DOCUMENT_TOKEN_TO_BE_REPLACED