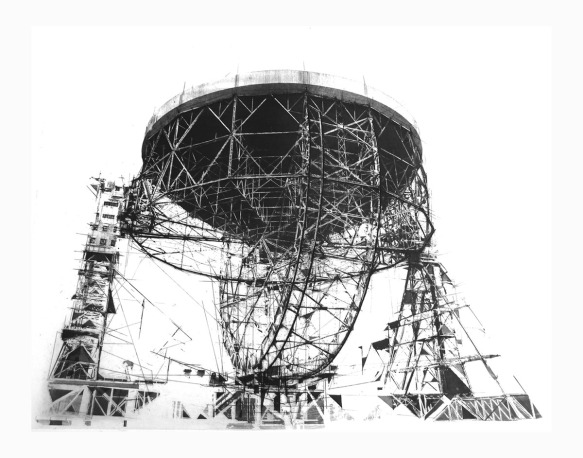 Transmission I (sold out))

The Jodrell Bank ObservatoryIt has been at the forefront of astronomical research since its inception in 1945 and tracked US and Russian craft during the space race. The Lovell Telescope, which was the world’s largest telescope when it was completed in 1957. The site in Cheshire is part of the University of Manchester. It is dominated by the landmark Lovell Telescope.

Chamberlain is interested in the use of a traditional Print process such as etching being used to record subject matter that is generally at the cutting edge of technology for its time. The etchings become an extension of his drawing, allowing him to record the location through the interlinking processes of drawing and printmaking.

Ian Chamberlain’s work reinterprets man-made structures as monuments placed within the landscape, acting as architectural metaphors of past and current technological achievements. He has had a long-standing fascination with technology and architectural forms especially the structures within industry, agriculture, science and the military. These have included Goonhilly Earth station, The Lovell Telescope, Cheshire Maunsell Sea Forts in the Thames estuary and the Acoustic Sound Mirrors on the south Kent coast.

Rabley Gallery will be exhibiting new works focusing on monoprints. The quality of these prints brings a fresh vibe to the artworks and offers a more unique and experimental field of play for the collector and for the artist as they develop series of imagery. The monoprint, unlike the monotype, is one of a series, so it is not completely unique. Monoprints are often thought of as variations on one theme.